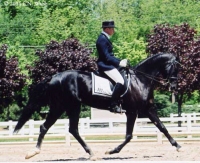 The Akhal-Teke is a rare breed. Slowly but steadily the breed gets more known.

If one considers even their worldwide extremely small population of around 4-5000 head worldwide, with most of their owners just enjoying their private equine exotic friends for their beauty, kindness or for whatever reason, one must agree that the Akhal-Teke is are genuine high performer.

As long as there won't be worldwide known riders such as Jaume Punti for endurance, Michael Jung for eventing, Ludger Beerbaum for showjumping or Edward Gal for dressage, just to name them as examples, but just competitors as you and me their performance, as respectable as it can be, will mostly remain in the dark, unknown by the wide horse people public out there.

But their time will come. Just to give you a small insight about their versatility please have a look at the following videos. There should be something for everybody:

Videos of AKHAL-TEKES in action